Home > Case Studies > I Was Made Redundant at 50: A Case Study

I Was Made Redundant at 50: A Case Study 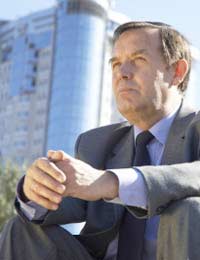 When Mike Woodacre was made redundant at 50, he took a long time to realise that this was the start of an exciting new opportunity.

Having worked as a store manager for a large builder’s merchants for over twenty years, Mike felt that he had nothing to offer a new employer. He had spent nearly all his working life at the builder’s merchants and knew it inside out. He had trained up a number of employees and seen the business grow into a regional chain, of which he felt like a key part of its success.

Knock to his Confidence

Mike told us, “I was totally unprepared for my redundancy. I had naively assumes that I would work at the builder’s merchants until I retired, so I took it really badly. My youngest son had just started university so my wife and I were looking forward to spending some quality time together at the weekends, as well as managing the financial commitment of two children at university.”

Mike was given the statutory redundancy payment, which was a substantial amount having worked for the company for many years, but his main concern was what to do when the money ran out.

He continued, “A couple of other colleagues were made redundant at the same time because our company was bought out by a national competitor and there was no suitable role for us, although we were offered an alternative, it required us to move a considerable distance, which we did not want to do and nor did our families. The redundancy money was helpful, but not enough to see me through until retirement, but I was so floored I couldn’t think rationally about what to do next.”

At this point, Mike sought some professional career advice, which he was able to find through his old employer. His main aim was to gain some perspective on his skills in order to decide what type of employment to look for. Mike was unable to be impartial about his own skills and felt that he had nothing to offer a potential new employer, both because of his age and the fact that he ad worked for one particular employer for so many years.

During the initial consultation, Mike was asked about what elements of his role at the builders merchant he really enjoyed, and what he did not like so much.

Mike explained, “The problem was that I couldn’t see beyond what I had been doing day to day. The career advisor really helped me to appreciate my transferable skills, such as dealing with customers, technical and practical building knowledge and dealing with a range of suppliers. She explained how my skills could be used in other jobs, which gave me a real confidence boost. I realised that one of the main problems had been my lack of confidence after being made redundant.”

Now that Mike was more clear about what he had to offer a potential employer, the careers consultation focused on what he hoped to achieve in his next ten to fifteen years of working life. Having gained a great deal of building expertise, Mike was keen to use it in a practical way. His experience in working with members of the public also meant he was comfortable making quotes. He was keen to work for himself, feeling ‘vulnerable’ from being made redundant and not wanting to go through that again any nearer to retirement age.

Mike decided that he would use some of his redundancy money to complete a plumbing course and he was entitled to some extra financial support for re-training from is previous employer. He registered as self-employed and offered his services as an all-round builder/handyman for small to medium domestic projects.

Names have been changed.